Our Bankruptcy Attorneys Treat Your Mountain of Debt as OUR Problem

Dave Cybak is a principal and one of the founding attorneys at Over the Mountain Law Center.  He has more than 21 years experience in the areas of Bankruptcy, Debt Collection and Creditor’s Rights Litigation.  Before opening Over the Mountain Law Center, and becoming a Debtor’s attorney, Dave was a Creditors’ attorney, representing several large national auto finance lenders, banks, credit unions, and title insurers in debt collection actions and actions to recover possession of their collateral. Over the years, Dave vigorously represented these Creditors in thousands of bankruptcy cases against consumer Debtors. He has a thorough understanding of all aspects of Bankruptcy Law, and was a frequent lecturer in seminars given to the legal staffs at several of his auto finance lender clients. Dave’s experience as a former Creditors’ attorney gives him a unique advantage in representing consumer Debtors, as he is familiar with most of the tactics and strategies that are used against Debtors in bankruptcy cases. Dave knows how your adversaries think, and is able to anticipate their next move. Dave also has extensive experience in the areas of Mortgage
Foreclosure Law, Title Insurance Litigation, Real Estate Litigation and General Commercial Litigation.

Lindsey F. Brown is the managing member of the Over the Mountain Law Center.  She has significant experience in construction litigation and has represented a variety of general contractors, subcontractors and material suppliers in mechanics’ lien and surety bond claims and actions involving breach of contract, construction defects, fraud, negligent misrepresentation, bankruptcy and consumer fraud. Her client base is varied including small local businesses as well as large national corporations. Lindsey has extensive courtroom experience in both state and federal court.

Noteworthy:
As a native of Jacksonville, Florida, prior to attending law
school, Lindsey served as research coordinator for the
Jacksonville Chamber of Commerce specializing in
economic development business recruitment. 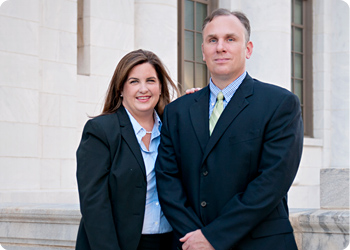